Our story began in 1968 when a then 21 year old Joe Thomson purchased some very well used, diesel powered sawmill machinery with the idea of building a portable stud mill out of it.  Plans soon changed, and instead of making the mill portable and limited to cutting stud length logs, it was decided to establish a permanent regular sawmill on a two acre property Joe had also purchased on Cumberland Road.  A site which was also adjacent to the the then private Comox Logging Road.  This latter road was then owned and operated by Crown Zellerbach Canada Ltd., and ran from their extensive forest lands stretching far to the north-west of Courtenay, (now the TimberWest lands), to their booming grounds at Royston.

This location was considered then to be convenient both for accessing logs and as a good site for retail and wholesale lumber sales.  It has subsequently turned out to be a very good for both.  Since the original mill’s log carriage was already capable of cutting much longer lengths than the 8 and 10 foot logs Joe believed he could easily access for making studs, and at the urging  of his father, who spent many weekends and evenings helping with the mill’s construction, the mill was instead built to initially cut up over 24 foot log lengths. 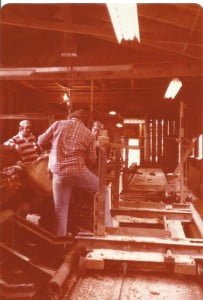 This later proved to be a source of much grief, considering the condition of the machinery and original, non-automated nature of the plant.  Turning long, heavy, large logs by hand with a peavey, setting and dogging them the same way, and trying to maintain accuracy of cutting over their length with equipment that was borderline ‘junk’ was a hopeless task.  The carriage was soon shortened, and while still capable of cutting up to a 20 foot log, most production was in 8, 10, and 12 foot lengths, with 16 foot the normal maximum.  Which, 50 years later, and with a much more modern, automated  and accurate plant,  are still our preferred lengths today.

Prior to building the mill, and for the first year after, Joe was still employed by Field Sawmills Ltd., where he’d gained considerable experience in a variety of sawmilling occupations.  When Fields replaced their original circular sawmill on Comox Road with a new and more modern band sawmill in 1969, Joe left their employ and went into business full time for himself.  Initially he operated the mill alone, or with the after hours and weekend  help of his dad, (also named  Joe, and a well known Courtenay auto mechanic and long time car dealer),  and the after-school work of his brother, Robbie. 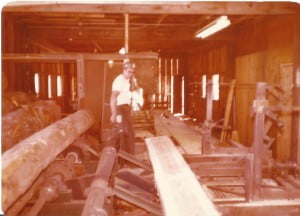 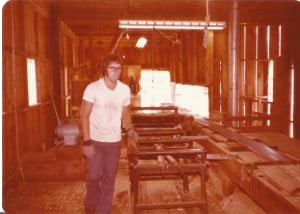 The two acre mill site provided the first trees sawn, and a neighbour contracted Joe to log  all the trees from an adjacent property in return for the mill getting the logs for free.  Soon there was also some custom sawing business coming in from other land owners, and the business began to show promise.  The first purchase of logs was made from A. W. Leakey Logging Ltd., who operated a large pole and piling yard on Fraser Road, about a mile away from the Thomson mill.  Today, Chinook Forest Products Ltd., the successor company to Leakey Logging and owned by two of Art Leakey’s sons, are still supplying us with logs.

When the original Caterpillar diesel engine that powered the mill proved to have inadequate power for the mill to accurately cut Fir, it was decided to replace it with a more powerful, two-cycle, GM diesel.  Before one could be located, however, BC Hydro’s then local manager suggested to Joe that he look into the possibilities of changing over to electric power.  Which, with the recent completion of the WAC Bennett Dam,  BC Hydro was then very highly motivated to find more BC customers for.  Their rates proved attractive, a power line was run in at no cost by BC Hydro, and we “lived better electrically”. 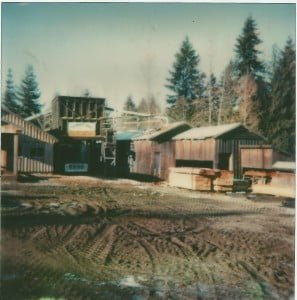 Original mill electrified in the 1970’s

Around the same time it was decided to incorporate what had been operating as a sole proprietorship under the name “Thomson Sawmills”, and become a more formally organised  Limited Company.  That name could not be used, however, nor could a number of other possible variants, which had already been claimed by other Thomsons elsewhere,  apparently.  By this time, too, Joe’s brother, Robbie, had left school, and was working full time in the mill.  He suggested  calling the company “Thomson Bros. Lumber Co. Ltd.”, and that was accepted by the Registrar of Companies as the business’s name, which it’s been ever since.

The mill duly electrified,  we began a series of improvements in the whole operation.  While most of our production at this time was Red Cedar, we were also finally able to successfully mill Douglas Fir, too, and began processing more of this species, ironically mostly as studs.  Field Sawmills purchased them en masse, planed and grade marked and packaged them, and used our production to augment their own in their export lumber sales to the USA.

1973 was a banner year for our operation, with Fields taking our Fir, and also providing us with Red Cedar logs, a species they didn’t like to cut in their own sawmill.  The Cedar was sold locally, both to retail customers, and to other building supply stores, and we became well known as a “Cedar mill”.

In 1974 Field Sawmills changed hands, and the new owner, Gregory Industries Ltd., decided to concentrate on cutting metric sized lumber for the Japanese market, and exit the US one.  While we still did receive some Red Cedar logs from Fields, we lost our market with them for our Fir studs and most other dimensions cut from that species.  There was very little local market at that time for Douglas Fir rough lumber, and we didn’t have a planer.  So we concentrated almost solely on sawing Red Cedar.

This changed in 1977, when Field Sawmills’ planer became surplus to their needs, and we were able to purchase and install it at our mill site.   With the planer-mill in place, we re-entered the Fir market locally, and also began milling considerable amounts of Western White Pine, which we were able to purchase from Crown Zellerbach, and also Weldwood of Canada, two of the then major forest companies in the Province. 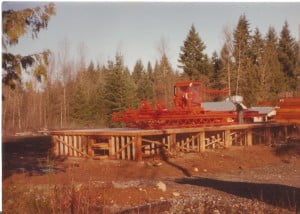 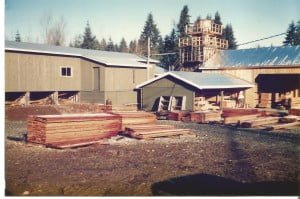 In 1979 the orginal sawmill was worn out to the point where replacement seemed the best option.  So it was removed, much of its equipment sold, and a new sawmill  was constructed.  Based on new equipment supplied largely by Canadian Morbark Ltd., the new mill was a vast improvement over what we had been using.  In 1981, there was a major renovation that increased the plant’s capacity even further, and with some minor changes over the ensuing years, this is the plant we are still using today (2020). 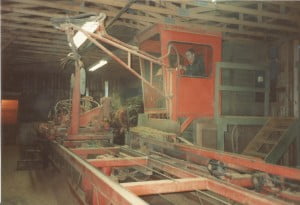 The Red Cedar business for us ended in 1995, when the price of logs in that species escalated rapidly due to the withdrawal from logging of much Red Cedar habitat, and the government also made it almost impossible for a small operator to deal with Cedar ‘waste’ without a massive further investment.  Since then we have concentrated on sawing Douglas Fir almost exclusively, though occasionally we still do mill and stock some small amounts of other species as well, such as Alder, Hemlock, and Pine, when market conditions warrant it.

From being a  relatively ‘expensive’ species, and one that had very little appeal market-wise as rough lumber in years gone by, our Douglas Fir lumber is now considered a great bargain, (compared to the current price of Red Cedar), and more of what we’ve sold in recent years has gone out as rough lumber, full sawn, than what we’ve planed.  We do stock it both ways, of course, and it’s being used more and more locally for the ‘traditional’ uses it once enjoyed ~ sidings, fencing,  posts, timber frame, and quality dimension lumber, where its strength and durability, (and now,  attractive price) are well appreciated.  Nothing is wasted.  Slabs and edgings and trim ends are also sold as firewood, while sawdust and planer shavings are marketed for animal bedding and nursery mulch. 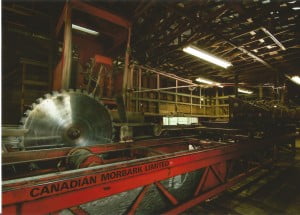 Having lasted in this business for, (so far ~ in 2020), some 52 years, we plan to be around for as long as we can still remain viable.  Joe and Robbie Thomson are still both active in the business, and Joe’s younger son, William, is here and assuming an ever larger role in carrying it on.  The challenges we face today are different ones than those we faced 52 years ago, and in some respects more onerous to deal with.  There was, we found, always another source of logs.  Even in the days when it was often  said, “You haven’t got a chance.  The big boys have them all.”  That wasn’t true, they didn’t.  We always got something to cut, and if we ever ran out, it wasn’t for long.  Today’s challenges are those of ‘taxation’, and ‘bureaucracy’, and pernicious ‘inflation’.  Time will only tell if we ~ and all of us, really ~ can overcome them.  Hope springs eternal, and if we’re allowed to employ experience gained, the best is yet to come!

A family sawmill since 1968. Come see what we saw!